Stereoscopic 3D images/video attempt to replicate what we see with our own eyes. Your eyes are approximately 2.5 inches or about 6cm (60mm) apart (also called interocular distance). As a result, each eye sees the image from slightly different perspectives and angles. The brain combines these two images into a seamless image and also uses the information to gauge distance and depth. This is also called binocular vision. 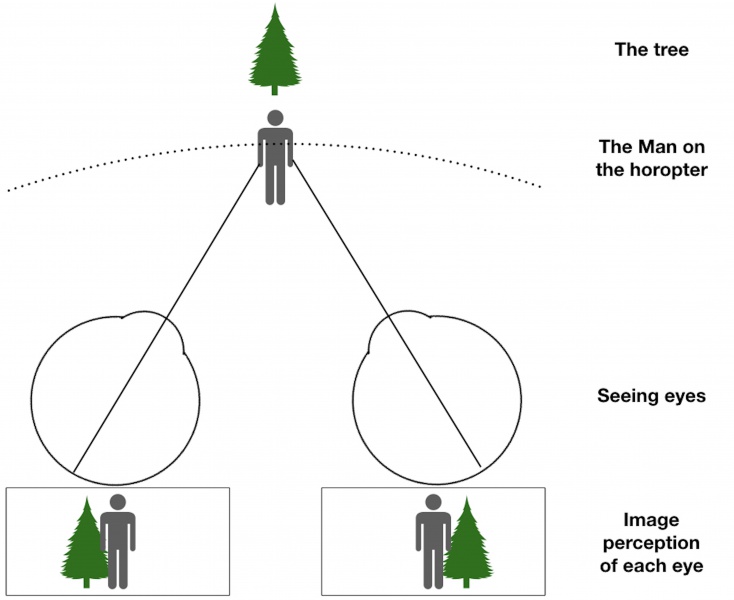 We can replicate this with a 3D Stereoscopic Camera, by having two cameras that are separated by roughly the interocular distance. These two images (left image and right image) are then presented individually to each eye using a stereoscopic viewer like Google Cardboard. The brain then combines these images and processes the subtle differences in perspective and angles to create depth perception, or a 3D image! We'll build a stereoscopic 3D camera using two Raspberry Pi Zeros and two Pi Camera 2s (since each Raspberry Pi can only support one camera). In order to make a usable camera, we also need a proper enclosure.

We'll use some Python to stream the camera output into a composite left-eye/right-eye browser-based video stream. You can then open this stereo video stream up on a browser on your mobile phone and place it in a stereoscopic viewer like Google Cardboard, and voilà! - we have our 3D stereoscopic Streaming Camera and Viewer! You can also make the 3D Streaming Camera more portable by using an RPi UPSPack V3 to add a battery backup, so you are not tethered by wires and can move around.

Now you can give a 3D house tour to your Nana or Abuelo without having to make them climb the stairs or leave the comfort of their chair, as you go and operate the camera for them to view remotely!

Or have silly 3D games where you show your friends or family themselves as they view the world you present through the Google Cardboard - turn the camera and point it at them, and watch their reaction as they see themselves in 3D! Quite trippy!

Items you will need:

If you are starting afresh, you need to first configure the SD cards for your Raspberry Pi Zeros with the Raspberry Pi OS. The Raspberry Pi Imager tool allows you to do some configurations ahead of time when you create your boot image. Firstly, note that we use Raspberry Pi OS Buster, which is not the latest version (called Bullseye at the time of this writing). Bullseye has made some fundamental changes to camera support. New Raspberry Pi OS releases will no longer support the familiar raspicam apps and Picamera Python library ). The new libcamera apps don't have Python support yet.

As a result, we've decided to stick with Raspberry Pi OS Buster and use the Python picamera library. There is a new picamera2 library in the works for Buster which will add Python support. Since we'll be using the Raspberry Pi Zeros in a headless setup (not connected to a monitor or TV), you'll need to enable SSH on them. We'll also want them to connect to the Wireless network directly on bootup. We can provide the WIFI network name and password credentials using the Raspberry Pi Imager tool setup. Once we have done this, we can do the rest of the setup later, after we boot up our Stereoscopic Streaming Camera hardware setup. We can just SSH into the Raspberry Pi Zeros and finish the rest up the setup, including getting the source code and running the programs.

Step 2: Set up your hardware

To make the wiring simpler, we'll have the two Raspberry Pi Zeroes share power, so the setup only needs one power cord (or battery pack hookup in the case of the portable setup). To do that, we connect the 5V and GND lines of the two Raspberry Pi Zeroes via the GPIO headers (we connect pins 2 and 6 in our setup - see https://pinout.xyz/ for more details). Make sure to double- and triple-check the connections as you risk damaging the Pis if the wiring is incorrect.

Additionally, make sure you use a sufficiently powerful power supply that can provide the power needed for both Raspberry Pi Zeroes - the official Raspberry Pi power supply for the 3B+ (with the micro USB) puts out about 2.5A and should be sufficient for the two Zeros.

Start by mounting the two Pi Zero Ws on the ProtoStax Enclosure for Raspberry Pi Zero and the connect the "power rails" via jumper wires, as shown. Add the side walls (including the two Tripod Mount side walls from the ProtoStax Stereoscopic 3D Camera Kit for Raspberry Pi Camera), and close everything up. Here is the final completed stereo camera setup, with an attached Tripod mount adapter plate (this will totally depend on the type of tripod you have!). You can download the software from GitHub. Alternately, you can install it using git

The program also has a home page (index.html) that will expose both video streams as a stereoscopic image (side-by-side), as

(you can access the stereoscopic stream from either url)

The viewer can thus see everything in 3D. The camera operator can move around to give the viewer a 3D tour from the comfort of their couch!

Step 5: Focusing the camera and other tips

For best streaming performance, make sure you don't have too many other programs or services running on your Raspberry Pi Zeros. If you're starting off with a clean slate with your SD card images, this should not be a problem. However, if you're starting with existing Raspberry Pis with already configured SD cards, do ensure that you've stopped and disabled extra services, so streaming performance is not affected.

When you open the stereoscopic streaming link on the browser on your mobile phone, it is best if you hide the toolbar, so extraneous elements are minimized in the viewer. You will need to adjust the phone laterally in the viewer so that the image appears as a single smooth one that appears 3D (and there are no blurry artifacts). Step 6: (Optional) Make the setup portable with a battery backup See it in action!

Here is the HTML and CSS used to format the page:

In order for the code to run automatically on bootup, you will want to run it as a service. The GitHub page's README has instructions on how to do that, including the configuration file for the service.

As always, I like to end by talking about how you can take this project forward with your own additions! Once you get comfortable playing around with the code sample and understanding the code, it is always nice to try to extend your learning by doing more. Here are some suggestions:

Can you think of other ways to extend this project? Share it with us in the comments below! 😊 Also do share photos/videos of your creation on your social media platform of choice - just tag it #ProtoStax and tag us @protostax so we can find you!